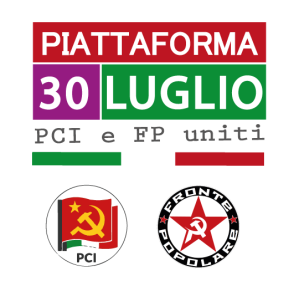 A year has passed since the first bilateral meeting between the Italian Communist Party and the Fronte Popolare. A year lived side by side, developing synergies and new forms of collaboration in all areas of our political action. A year spent for the communist unity in the context of the unity of action of the working-class left.

During these twelve months, we have gained a complex of shared experiences of great importance and achieved essential results. We have indicated a direction that breaks with all forms of self-referentiality, sectarianism and ostentation of primogeniture. A path that we have taken with conviction, that we share and increasingly intend to share with many comrades, wherever they are located.

Now, we believe that we have developed the conditions for a decisive step forward. We, therefore, sign this agreement of common action with the enthusiasm that marks the beginning of a new phase of commitment.

Great proximity of political culture unites the Italian Communist Party and the Fronte Popolare. Both our organizations are rooted in the historical experience of the international and Italian workers’ movement, in the Italian Communist history and experience, in the values of the anti-fascist Resistance and the Republican Constitution. Together we are determined to seek ways to give new impetus to the struggle for socialism, to explore with resolve and authentically dialectical inspiration the contemporary issues of our time, to decline in all areas of the battle for social and gender justice, anti-fascist and anti-racist, the Gramscian theme of revolution in the West, valuing the traditional forms of political action and experimenting with new ones.

We are therefore committed to a joint theoretical and cultural research, making available to each other, as a shared heritage, communication tools, publications, skills, relationships and experiences. By joint agreement, we make available to all comrades the extant spaces of confrontation and political research, to infuse new dynamism to our journey to understand the world and transform it. We also agree on sharing the new tools that we will build in the future to this scope.

Both the Italian Communist Party and the Fronte Popolare are engaged in dense networks of international relations, which partially overlap. In an era marked by capitalist globalization, by unprecedented interconnection and human mobility unprecedented in history, by the aggressiveness of old imperialisms and the emergence of new threats to peace and freedom of peoples, we agree to establish permanent coordination between our activities in the international arena. The shared perspective is to feed the momentum of the struggle for social transformation.

This permanent coordination should serve to strengthen our initiative in our respective international spheres, to explore and learn together the reality of the communist movement and the working-class and socialist left in Europe and the world. The goal is to place the Italian communists and communists at the forefront in determining spaces of unity of action, political and cultural exchanges, bilateral and multilateral relations that stimulate the anti-capitalist struggle in our time.

To this end, and based on the continuous confrontation that we will be able to coordinate and animate between us, we recognize each other’s full legitimacy and representativeness in their respective bilateral and multilateral areas of work, for which we will create a systematic exchange of information. Together we will work to spread, among the working classes of our country, the knowledge of the experiences of the construction of socialism currently underway. We also intend to put at disposal our understanding of the revolutionary struggles that are developing in every continent, and of the social struggles that are taking shape everywhere and especially in the imperialist countries of the Atlantic area, of which Italy is part.  Together we renew our commitment in the fight for Italy’s unilateral exit from NATO – a military alliance dangerous for peace and which we believe should be dissolved.  United, we stand for the closure of all NATO military bases on the national territory and to put an end to the participation of Italian troops in international missions that damage the freedom and self-determination of peoples. The international work area that we will coordinate will be organized based on the identification, by joint agreement, of shared work objectives, based on the general principle of the pursuit of communist unity within the broad scope of the unity of action of the working-class left.

The Italian Communist Party and the Fronte Popolare share the opinion about the irreformability of this European Union. The EU of Maastricht and Lisbon treaties is engaged in a fierce attack against the world of work. It pursues policies that strike the enduring spaces of democratic control over the economy and popular sovereignty. At the European level, there is an unprecedented growth in the private appropriation of socially produced wealth.

Together we are engaged in the battle against this European Union. We fight against EU effort to generalize its ordoliberal paradigm on a planetary scale, through free trade treaties, and anti-democratic and technocratic drive. We believe that the only way to defeat this ultra-imperialist design is to question the membership of Italy and each EU member country, prefiguring at the geographical region level a confederation of sovereign states. We are aware that taking this path would imply a profound restructuring of the national economy, aimed at safeguarding the welfare and interests of the Italian working classes and other European countries. For this reason, we effortlessly promote a deep reflection on the foundations and guidelines for this economic conversion. We aim to unveil consequences in relations among peoples, and between states, especially the link between this transition and the construction of a socialist society.

At the same time, we do not intend in any way to give up fighting in defence of the interests of the working classes in the context of the structural and superstructural relations that characterize this EU. We take note of how the common market of capital, labour and goods has a destructive impact on the Italian social tissue. The common market increases the gap between North and South Italy, and impoverish our territories as it ties them to European value chains. We jointly reach out for alliances and synergies necessary to counter these designs on a continental scale. We especially value internationalist relations with communist organizations in the rest of Europe, seeking the unity of action with all the forces of the working-class left, in the spirit that gave rise to the GUE group in the European Parliament.

We recognize each other’s full legitimacy and representativeness in their respective bilateral and multilateral working areas. We commit ourselves to coordinate based on the identification of shared working guidelines, with a view to continuous, dialectical and timely communication and the full development of possible synergies.

The Italian Communist Party and the Fronte Popolare consider the fight against the destruction of the environment by capitalism as a vital and indispensable part of the class struggle.

For this reason, we will coordinate the theoretical and practical work for a more incisive class-based anti-capitalist environmentalism, in our country, in Europe and internationally. To this end we will interact together and in a coordinated way, with a united spirit, and analyze every movement and proposal that arises in the environmentalist and ecosocialist sphere, promoting the autonomous point of view of the communists.

The Italian Communist Party and the Fronte Popolare share the absolute priority given to the need to the enlargement of the trade union base among working women and men. This is an indispensable step to restore an autonomous subjectivity to the world of work, cultivate a culture of conflict and open up to new forms of participation and consiliarism that draw inspiration from the material conditions of the working classes. Aware of the extreme fragmentation of the trade union movement, we do not identify a specific trade union organization of reference. We will work together to give rise to vital, dialectical and respectful relations of mutual independence between the political left and the trade union movement. We will coordinate to ensure our support for the social and trade union conflict by openly promoting concrete and convincing political proposals. To this end, we make available to each other the work done so far, and the results obtained. We intend to work together for the unity and coordinated action of all female and male workers fighting on a class basis, wherever they are placed at the union and political level.

The Italian Communist Party and the Fronte Popolare are organizations committed against all forms of patriarchy, machismo and sexism both in society and internally. Ours is intersectional and therefore class-based feminism. It conceives the struggle for women’s liberation as an indispensable foundation for any form of human emancipation. We firmly believe that there can be no socialist perspective without women’s liberation. On this ground, we will work together, struggling for the full expression of feminist subjectivity and close dialogue with the feminist movements.

ANTIRACISM, FIGHT AGAINST XENOPHOBIA AND RELATIONSHIP WITH MIGRANT COMMUNITIES

The construction of a xenophobic common sense is one of the fundamental vectors of fascistization of our society. It has allowed the flourishing of old and new forms of racism in Italian society. It is a vital terrain for the exercise of class struggle. The Italian Communist Party and the Fronte Popolare intend to work together to help to build the foundations of a counterattack on this ground. Our common goal is to support migrant subjectivities and their organization fully. We promote migrants’ self-organization. We provide the necessary support to all communist, socialist or authentically progressive subjectivities in migrant communities.

AFFIRMATION OF RIGHTS, DEVELOPMENT OF PUBLIC SERVICES AND PRINCIPLE OF NATIONALIZATION AND EXPROPRIATION

The Italian Communist Party and Fronte Popolare consider the defence of rights and public services as a vital ground for political action and popular organization. Health, school, university, energy, transport and many other strategic sectors must be taken away from private control to ensure environmental protection, quality of life and an integral response to the needs of the population, balanced and sustainable economic development.

This terrain is for us the first line of attack to reverse the trend towards privatization and concentration in a few hands of fundamental areas of social living. However, our project of society goes further. It embraces the dimension of expropriation of entire economic sectors, their transition to the state hands or their reliance on communities of workers or users, as the basis for the construction of a new society.

These principles, inscribed in the Republican Constitution, represent for us a necessary and possible manifestation of popular sovereignty. In the same way, it is for us an exercise of popular sovereignty to create and participate in broad unitary fronts for the defence of rights and public services, which we conceive as areas of construction of direct participation and, in perspective, of popular power. On this ground, the first year of joint action has allowed us to participate together in the successes on this path, and we intend to continue along, closely coordinating our work.

The electoral field is for the fundamental guidelines of our political work accessory. However, it is relevant both to give voice to the demands of the transformation of the society we carry and to defend the legacy of the democratic struggles conducted by the workers’ movement since its inception.

Concretely, as far as the national consultations are concerned, the Fronte Popolare is committed to supporting the choices made by the Italian Communist Party, which in turn engages in representing the demands, positions and expressions of the Fronte Popolare adequately.

At the local level, we commit in supporting each other’s choices where only one of the two organizations is present and, where both are present, to work together to build solutions that ensure the full enhancement of the presence and action of Communists. As far as referendums are concerned, we commit ourselves to develop, where possible, a shared position that will allow for the creation of joint referendum campaigns. 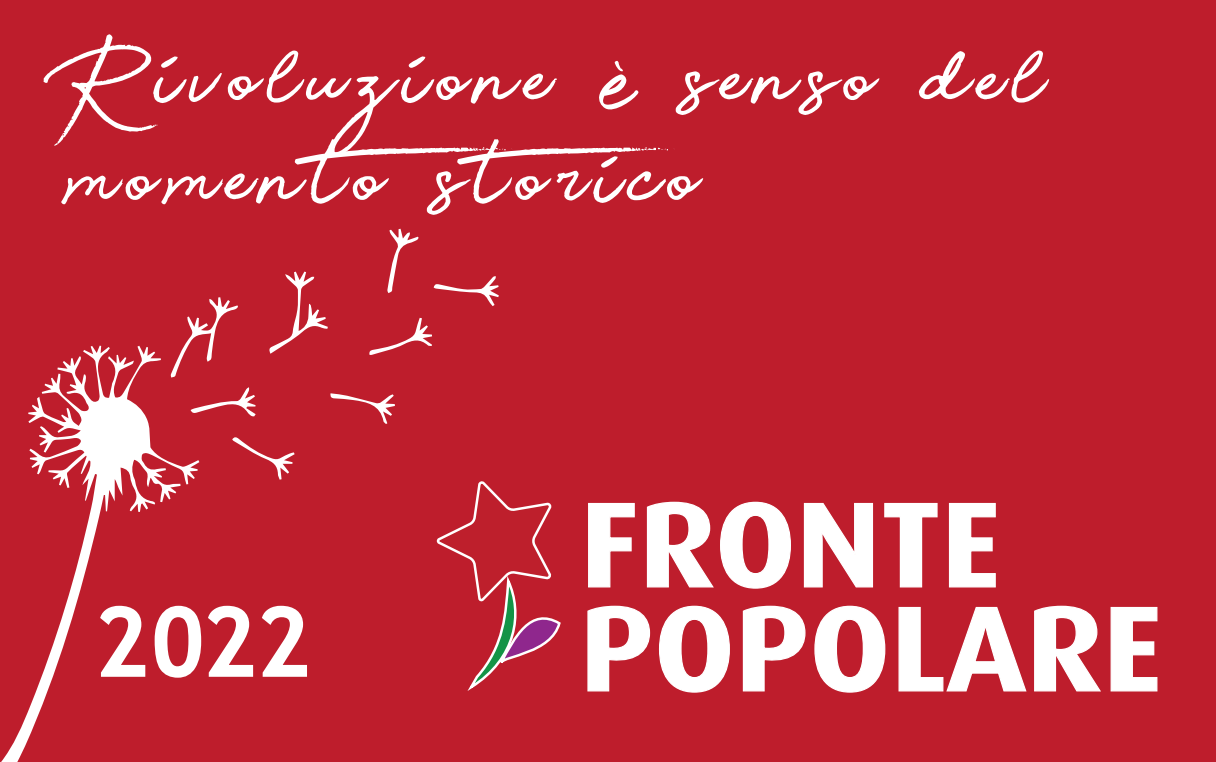